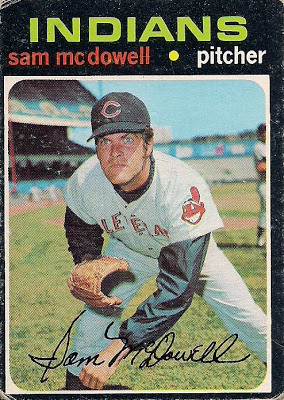 Who is the man: Sam McDowell was THE MAN heading into the 1971 season. He had just finished off the first and only 20-win season of his career. He had struck out 304 batters, the second highest total in his career, and good for his fourth straight year of leading the league. This would lead up into a 1971 full of upheaval for Sudden Sam, who actually quit in the middle of the '71 season when his contact was voided by commissioner Bowie Kuhn.

Can ya dig it: I've had this card since I was a teenager. I tell you, the intense look on McDowell's face freaked me out then. He looks half-crazed!

Right on: Another instance of wearing the warm-up jacket under the jersey. You just don't see that fashion statement anymore.

You see this cat McDowell is a bad mother: McDowell was once featured on the cover of Sports Illustrated with a headline that said "Faster Than Koufax?"

Shut your mouth: McDowell's drinking ways the last four years of his career got himself into trouble with a host of people. Once when McDowell was arrested for being drunk and disorderly, his manager for the Giants, Charlie Fox said, "So what else is new? It happened every year with Cleveland, too. If he keeps stepping out of line, he'll be a pauper. We already have our fines set up. We call it the 'Sam McDowell Fund.'"

No one understands him but his woman: McDowell's wife, Carol, divorced him and gained custody of the children when his drinking got too much after his career. The action helped spur McDowell to find help for his disease and eventually led to a career in helping other athletes in a variety of ways. 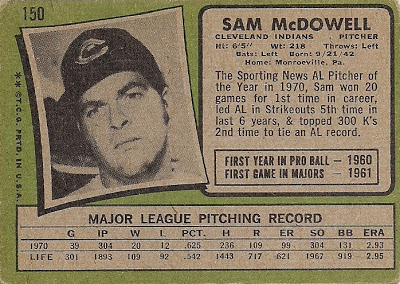 (A word about the back): Exactly one strikeout per inning in 1970. Both stats are impressive.
Posted by night owl at 3:09 AM