Who is the man: Jackie Hernandez was the starting shortstop for the expansion Kansas City Royals in 1969, but his playing time was almost cut in half in 1970. He hit .231 in 83 games.

Can ya dig it: Hernandez is striking the batting pose in Yankee Stadium.

Right on: This is another one of the first 1971 cards I ever owned. Something about the second series in this set. My friend's older brother must have bought a lot of cards when the second series was in stores.

You see this cat Hernandez is a bad mother: Hernandez recorded the assist on the final out of the 1971 World Series. He fielded a grounder from the Orioles' Merv Rettenmund and threw him out at first base to clinch Game 7 of the Series for the Pirates.

Shut your mouth: I mentioned Hernandez just five posts ago. He helps run a baseball academy with Paul Casanova, and is on the video that I linked there.

No one understands him but his woman: Hernandez's on-card progression from capless youth with the Twins in the 1968 set to bushy-haired, mustachioed veteran for the Pirates in the 1974 set is rather amusing. He doesn't look like the same guy at all. 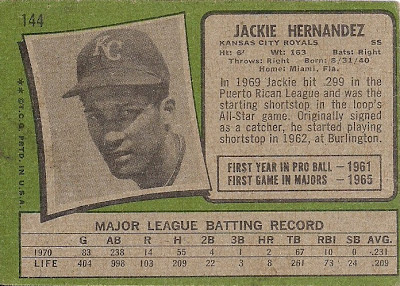 (A word about the back): Nobody ever uses the word "loop" for "league" anymore.
Posted by night owl at 11:59 PM