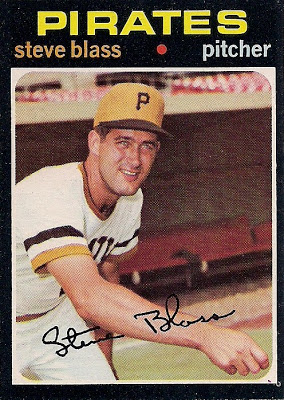 Who is the man: Although Steve Blass recorded a sub-.500 won-loss record in 1970, going 10-12, he was in the midst of a five-year period that solidified him as one of the better starters in the National League. He went 18-6 and threw seven shutouts in 1968 and had the best year of his career in 1972.

Can ya dig it: Blass would enjoy a tremendously successful postseason in 1971. It's always interesting to see the card of a ballplayer that is issued just prior to the defining moment of his career.

Right on: It almost looks like there are sofas in the dugout.

You see this cat Blass is a bad mother: Blass pitched a complete-game four-hitter in Game 7 of the 1971 World Series, leading the Pirates to the championship over the Orioles. He struggled at the beginning of the game. But after Orioles manager Earl Weaver tried to rattle him by complaining to the umpire that Blass was not standing on the rubber properly, Blass allowed just one hit the rest of the game.

Shut your mouth: I was introduced to Blass when I read Roger Angell's masterful article about him, "Gone for Good," which details Blass' famous inability to find the plate after the 1972 season. It is filled with anecdotes that are just heartbreaking. The story affected me for a long time. There is one point, in 1974, when Blass gets sent down to the minors, his decline well-known throughout the nation. After a really bad start in Toledo, Blass is so upset that he gets on the bus without showering or taking off his uniform. The team stops in a restaurant and Blass walks in with a two-day beard growth still in his uniform. The patrons just stare at him. "God, that was an awful trip," Blass tells Angell.

"God, that was an awful trip." That sentence has stayed in my brain all these years.

No one understands him but his woman: Blass' demise was so incomprehensible that they named the sudden loss of one's pitching ability after him. It's called "Steve Blass Disease." 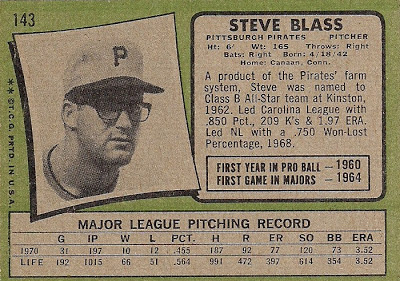 (A word about the back): It almost looks like Topps took the photo out front and stuck some glasses on Blass.
Posted by night owl at 12:23 AM