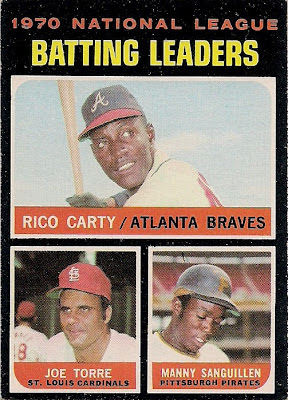 Who is the man: Rico Carty is the man. He beat the second-place finisher in the batting race by more than 40 points! Highest batting average in major league baseball in 13 years, too.

Can ya dig it: I'm going to say Manny Sanguillen is signing an autograph. He's doing writing of some sort on his individual card in the 1971 set, so I'm thinking this picture is from the same photo shoot.

Right on: I'm almost certain the player behind Joe Torre is Mike Torrez. He wore the number 48 for the 1970 Cardinals and that sure looks like his last name on the back of the jersey.

You see these cats are bad mothers: You'll have to find out why they're bad mothers when their individual cards pop up here.

Shut your mouth: Carty was acquired by the Cubs in August of 1973, but didn't get along with all-star third baseman Ron Santo. The Cubs promptly dealt Carty to the A's a month later. Carty complained that Santo was a selfish player and that the Cubs would never win another title as long as Santo was on the team.

No one understands him but his woman: Carty was left off the All-Star ballot in 1970, even though he hit .342 in 1969. But fans wrote him in as a starting outfielder. I guess they understood. 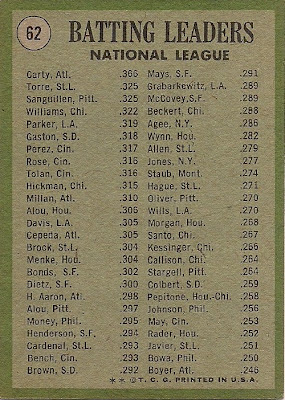 (A word about the back): I get a kick out of seeing Wes Parker so high on the batting average leaders.
Posted by night owl at 12:50 AM