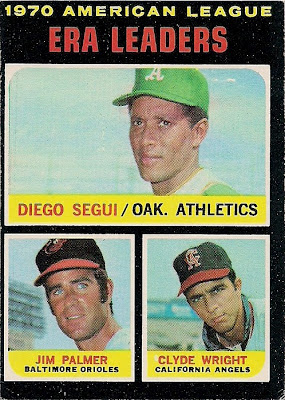 Who is the man: Diego Segui is the man, who ended up as the earned-run average leader by starting and relieving for the Oakland A's in 1970.

Can ya dig it: ERA leaders cards are my favorite leaders cards because you're guaranteed of seeing players who you don't expect to be on leaders cards. Segui? Wright? Who let those guys in? I love it.

Right on: Two of the three players on this card had sons who played in the major leagues. What's your excuse, Jim?

You see these cats are bad mothers: Oh, they are. But we'll talk about that later.

Shut your mouth: Segui was known for taking his sweet time on the mound between pitches. He'd stare in the outfield, rearrange the dirt on the mound, blow on his hands. During the 1975 World Series, broadcaster Joe Garagiola said that Segui's rituals on the mound were "like spreading ether over the ballpark." An enraged Segui confronted Garagiola about the remark before Game 5 and demanded an apology.

No one understands him but his woman: Wright fell into a drinking problem after his major league career. It got so bad that his wife threatened to leave him if he didn't stop. One day he went golfing and then drinking. When he came home, his wife was gone. His wife came back, with their son, Jaret, the future major leaguer, who was 3 at the time. Wright tried to get in the car. His son pressed the lock down, locking him out. Wright stopped drinking. 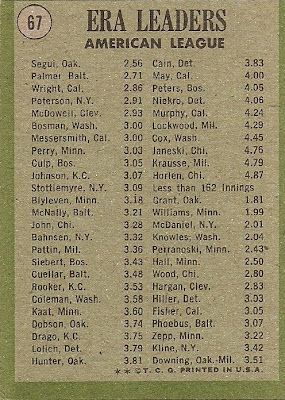 (A word about the back): Interesting. I never realized this. Topps featured a separate listing for pitchers with less than 162 innings.
Posted by night owl at 2:46 AM