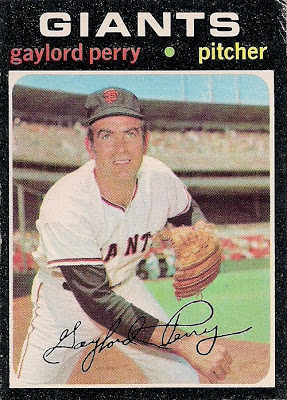 Who is the man: Gaylord Perry had just completed a 1970 season in which he set what were then career highs in victories (23), games started (41), shutouts (5) and innings pitched (328 2/3). He finished second in the Cy Young Award voting to Bob Gibson.

Can ya dig it: I can't get used to seeing Perry with dark hair. Gray that man up!

Right on: Do you think he just threw a spitball?

You see this cat Perry is a bad mother: Perry was a master at getting into the heads of hitters and managers with his "will I or won't I throw a spitball" bit. During a single season in 1972 with the Indians, hitter Mike Epstein threatened to come out to the mound with a bat, A's manager Dick Williams ordered umpires to have Perry change his shirts, and Tigers manager Billy Martin brought a bloodhound to the game to sniff baseballs.

Shut your mouth: During the 1971 NLCS, a TV reporter sat in the stands next to the Perry family while Perry was pitching. The reporter asked Perry's 5-year-old daughter "does your daddy throw a grease ball?" The daughter said, "It's a hard slider."

No one understands him but his woman: Perry repeatedly denied throwing a doctored baseball until finally confessing in a book in 1974. But after the book, he continued to deny throwing a spitball, even suggesting that the book was a ruse. 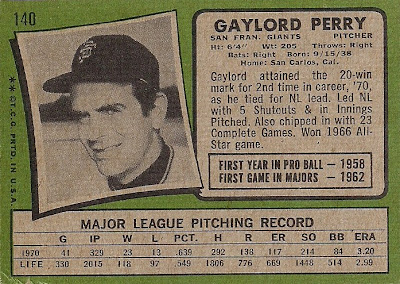 (A word about the back): 23 complete games. And he pitched for 22 years. Just sayin'